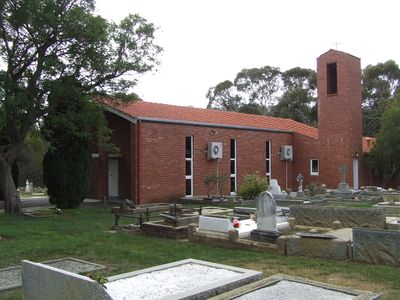 The cemetery has a variety of monuments, many of which display craftsmanship in the disciplines of ironwork and stone masonry, and are arranged in ordered rows in an attractive lawn setting. The place is historically important as it provides a record of the development and growth in the region. The place is associated with a number of well-known people connected with the history of Armadale and Kelmscott and is a burial place for many individuals who contributed to the development of the region. The cemetery is the burial place of several hundred people who died between the 1870s and the present, many having descendents living locally who continue to visit the place. The continuous use of the cemetery and efforts to maintain and improve its appearance is evidence of its importance to the community’s sense of place.

This church and cemetery is located on the east side of River Road near the intersection of Church Street in Kelmscott. The grounds are bounded by a metal-framed chain-link fence, with an entry gate directly opposite the church building which comprises a pair of face-brick piers supporting two ornate metal gates. Jacaranda trees line both sides of the entry driveway, with graves on either side. This grassed cemetery includes over 300 graves dating from 1875-2003, with the graves oriented due east- west. The graves are set out in ten rows that run parallel to the front boundary, with narrow spaces between each plot. Graves are generally marked with headstones, with ornate stone, concrete or iron surrounds. The church comprises a single-storey brick and tile building with a simple rectilinear form and a gable roof, and featuring a three-storey bell tower. There are long narrow evenly spaced windows along the north and south elevations. A hall is located to the rear.

The land on which the cemetery is located, was granted by the Colonial Government in 1870, for a church and graveyard, although the title deed to the land was not issued by the Lands Department until 1875. In March 1871, J Welbourne of Guildford, drew up plans for a small church (20 feet by 15 feet), St Mary's Church. The church was built by Thomas Buckingham Junior (and a hired mason), for a cost of 62 pounds, the money being raised by a subscription. Local timber was used, and the hand-made bricks came from a nearby kiln. Although services were held in the church from its completion in August 1871, it was not consecrated until 29 March 1874. As Kelmscott had no resident clergyman, services at St Mary's were held monthly, with visiting clergy attending. Despite additions carried out in 1896 and 1928, St Mary's Church was eventually unable to accommodate the growing congregation and in the 1950's a decision was taken to demolish the old church and replace it with a new building. In 1963, the new St Mary's In The Valley Church was constructed, not precisely in the location of the former church, but slightly southeast so that the building was no longer aligned due east-west like the existing graves. The first burial in St Mary's Church graveyard was Mary Buckingham (nee Chaunter), aged 60, who was buried on 12 January 1875. Mary's husband Thomas Buckingham Snr, and William Martin were both buried in 1879. Other well known local pioneers buried in the cemetery include Betsy Cockram (nee Buckingham), Richard Cockram, Thomas Buckingham Jnr, Hannah Buckingham (nee Salter), Charles Fancote, Caroline Fancote (nee Buckingham), George David Batt, David and Mary Ellen Batt, Thomas and Sarah Jane (nee Marsh) James, Ellen Salter (nee Buckingham), and William and Mary Ann (nee Marian) Butcher. The latest burial, in May 2003, was of Bessie Spyvee, who was a descendant of the Buckingham family.

Sourced from Heritage Council of WA.

This category has the following 3 subcategories, out of 3 total.