The Kelmscott Public Cemetery on Third Road was established in 1905 and closed in 1955. Of the 10 people that were buried there, nine were later moved to other locations. Arthur ‘Cliff’ Ewen’s remains are still on site at what is now John Dunn Oval, in an area of native garden close to Third Road. The original cemetery land was purchased from Mrs Goss in 1904 for 60 pounds. The area of land was quite large, but over the next four decades the number of burials remained very small.

The burials, in sections according to religious category, were reportedly quite spread out on the site. In the mid-1950s it was proposed that the 10 burials be confined to an area of around 1 acre, to free up land which could otherwise be used. This would necessitate the moving of some graves.

During the 1960s, the newly-vacant portion of land nearby to the reduced cemetery became part of the Shire's rubbish dump. In around 1969, it was decided that the cemetery be closed altogether and the remains relocated. Similarly it was decided that the waste disposal site also be closed and the land be made suitable for a recreation ground and pavilion, later becoming the John Dunn Oval complex. 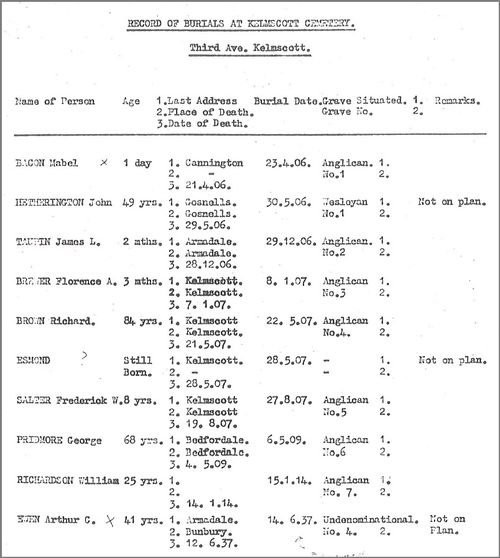 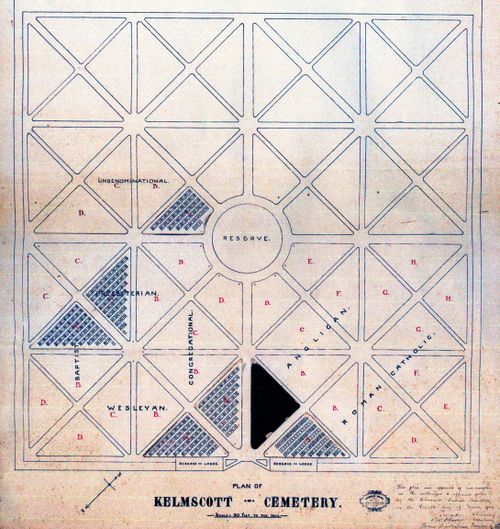 This section of the wiki contains information transcribed from handwritten records and may contain some inaccuracies. Staff and volunteers of the Birtwistle Local Studies Library are continually working on the pages' information; editing, correcting, and updating as needed. Wikis are designed to encourage community input to ensure information is as accurate as possible. Suggested amendments or changes are welcome, either by phone or email so please contact us – changes may only take a few minutes to make.