Enlisted at the Claremont camp on 20 Dec 1940, and on 3 Jan 1941 he was sent to the Northam camp to begin his formal training with No. 2 Training Battalion having been identified for the 8th reinforcement draft for the 2/28th Battalion. From 17 Feb 1941 until 7 Mar 1941 he needed treatment from the Northam Hospital for diarrhea. Rejoining his unit he was transferred to the 13th Training Battalion on 11 Mar 1941. On 17 Apr 1941 he was identified as a member of the 7th reinforcement draft for the 2/28th Battalion, and with training coming to an end he was granted pre-embarkation leave from 24 Apr 1941 until 1 May 1941. On 18 May 1941 he was appointed Acting Lance Corporal, and on 24 Jun 1941 Acting Corporal.

On 5 Jul 1941 Ronald embarked for overseas in Fremantle aboard the HMT Aquitania as part of convoy US 11A, disembarking on 25 Jul 1941 in the "Middle East" and reverting to Private on joining the 26th Australian Infantry Training Battalion (26th AITB), but being again promoted Acting Corporal the next day. Two days later he was admitted to the 2/1st Australian General Hospital with chicken pox, remaining with them until 15 Aug 1941 when he rejoined the 26th AITB. On 12 Sep 1941 he was transferred to the 2/48th Australian Infantry Battalion, joining them on 18 Sep 1941 when he again reverted to Private. He was posted to "D" Company. Ill with the measles, Ronald was admitted to the 2/7th Australian General Hospital on 9 Jan 1942, remaining in their care until 27 Jan 1942 when he was transferred to the 2/1st Australian Convalescent Depot. On 19 Feb 1942 he had rejoined the 2/48th Battalion via the 26th AITB.

Ronald was wounded in action on 10 Jul 1942 with what was described as a "crush injury right chest". Early in the morning of the 10th the 2/48 Battalion attacked mixed enemy Italian and German positions on a ridgeline forward of El Alamein. Having consolidated their gains the 2/48th Battalion had to withstand 6 bombing raids by up to 40 Stuka dive bombers per raid. In the afternoon they were attacked three times by a squadron of tanks, with the tanks running over the top of the men in shallow slit trenches due to the lack of mine or anti tank defences. Each attack was eventually repelled, as were all others later in the battle. Casualties for the 30 odd hours of the battle were 5 KIA, 20 WIA (5 from Ron's company), 13 Missing believed POW. Meanwhile they had captured 89 Germans, and 835 Italians along with destroying 6 German tanks and captured 16 field guns, nine anti-aircraft guns, and 11 machine guns. The description of Ronald's injury indicates that he was probably one of the men run over by the tanks, afforded insufficient protection from his slit trench due to the rocky nature of the ground and the lack of time to prepare the defences.

Ronald was treated by the 12th British Light Field Ambulance on 10 Jul 1942 and by the next day he was in the 8th British General Hospital before being transferred to the 63rd British General Hospital on 12 Jul 1942. On 19 Jul 1942 he was discharged to duty, and by 30 Jul 1942 he had rejoined the 2/48th Battalion. Between 25 Sep and 12 Oct 1942 Ronald attended the 9th Australian Division's Machine Gun School. On 16 Nov 1942 he was promoted to Acting Corporal, but on 7 Dec 1942 he had to be evacuated to the 2/6th Australian General Hospital suffering with hepatitis, reverting to Private on leaving the field. On 31 Dec 1942 he was transferred to the 2/1st Australian Convalescent Depot and on 11 Jan 1943 he rejoined his unit who at the time were in Palestine.

In late January the battalion packed up and began a move back to the east bank of the Suez Canal, where Ronald and his battalion boarded the HMT Nieuw Amsterdam at Port Tewfik on 1 Feb 1943. Sailing the same day they joined a large convoy in the Red Sea before heading into the Indian Ocean. Arriving in Fremantle on 18 Feb 1943, the Western Australian troops were granted 21 days leave before rejoining the battalion in Adelaide. Between 30 Mar and 7 Apr 1943 the battalion was transferred by rail from Adelaide to Atherton in North Queensland to begin their jungle training. From 9 Jun until 16 Jun 1943 Ronald was treated by the 2/6th Australian General Hospital for an undiagnosed illness, and then on 3 Aug 1943 along with the rest of the battalion Ronald boarded the USS Henry T Allen (APA 15) in Cairns for Milne Bay in Papua. The day after their arrival he was promoted Corporal, with his rank confirmed a week later, having been proclaimed proficient as from 1 Jul 1943 and entitled to additional pay. This was removed from him on 11 Aug 1943, no reason being given. On 2 Nov 1943 he was seen by the 2/11th Australian Field Ambulance and treated for Furunculus. On 5 Nov 1943 he was forwarded to the 2/5th Australian General Hospital and on 11 Dec 1943 to the 113th Australian Convalescent Depot. Condition not improved he was admitted to the 2/1st Australian General Hospital on 11 Jan 1944.

Discharged from hospital on 25 Jan 1944, he was embarked aboard USAT Etolin on 18 Feb 1944 in Port Moresby, disembarking in Brisbane on 22 Feb 1944 and he then rejoined the battalion who were back in Australia for leave and to rebuild. Ronald was next struck down by malaria, and after being seen by the 2/1st Australian Casualty Clearing Station on 4 May 1944 he was sent to the 2/6th Australian General Hospital on 6 May 1944. He remained with them until 1 Jun 1944 when he was cleared to return to the battalion which he did on 2 Jun 1944. On New Year's Day 1945 Ronald joined the Australian Training Centre as an instructor, where on 29 Jul 1945 he sustained an accidental sprain to his left ankle. On 30 Jul 1945 he was admitted to the 22nd Australian Camp Hospital, remaining with them until he was released on 14 Aug 1945. 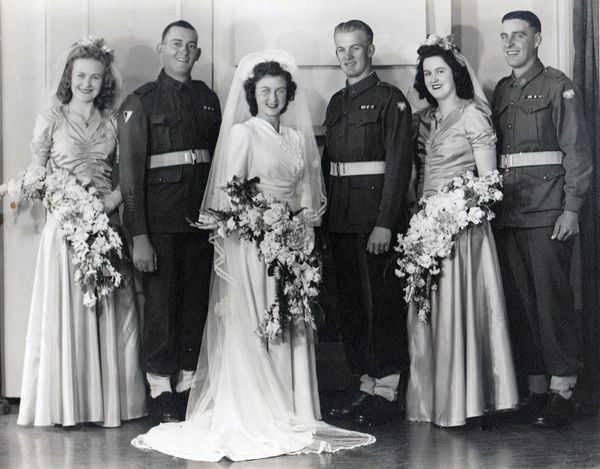