Enlisted at the Claremont Depot and while there required medical attention from 15 - 19 Nov 1940. On 27 Nov 1940 he was transferred to the 3rd Depot Battalion at Northam camp, and on 4 Dec 1940 was allocated to the 2/4th Australian Machine Gun Battalion. On 24 Feb 1941 he returned to the Claremont camp to undertake a Motor Transport course, and on 10 Jun 1941 he was granted trade status as a Grade 3 Driver.

James along with the rest of the 2/4th Australian Machine Gun Battalion, embarked in Darwin on 30 Dec 1941, and while his records say it was for 8th Military District, which covered New Guinea, the Solomon Islands, and the New Hebrides, the real destination was Singapore. They had gone to Port Moresby to join an escorted convoy. Given that the Japanese had subsequently attacked Rabaul, the convoy was rerouted via Sydney and Fremantle. On 24 Jan 1942 The battalion and James disembarked in Singapore. On 8 Feb 1942 the Japanese attack on Singapore Island commenced and it was all over by 15 Jan 1942. On 16 Feb 1942 James' records note that he was missing in Malaya, and on 20 May 1943 that he was a POW.

James was initially held prisoner at Selerang Camp and Changi Barracks with POW Number 4/5901. He was later sent to Thailand as part of 'D' Force and at various times was in Kanu II, Tamuang, Chungkai, and Nakom Nayok camps.

On 20 Sep 1945 James was recovered from the Japanese in Siam (Thailand), and he was flown to Singapore. On 24 Sep 1945 James enplaned on the RAAF's Douglas Dakota C-47 A65-89 in Singapore for Morotai via Labuan, arriving there on 26 Sep 1945. On 30 Sep 1945 he deplaned from A65-89 in Brisbane after a flight from Morotai via Townsville. He was placed on a train for Sydney, arriving there the next day, 1 Oct 1945. On 6 Oct 1945 he boarded a troop train in Melbourne for Perth, and on arrival on 10 Oct 1945 was admitted to the 110th Australian Base Hospital (Hollywood Repatriation Hospital post war). He shared time between the hospital and the 109th Australian Convalescent Depot on Point Walter until he was discharged on 13 Dec 1945. 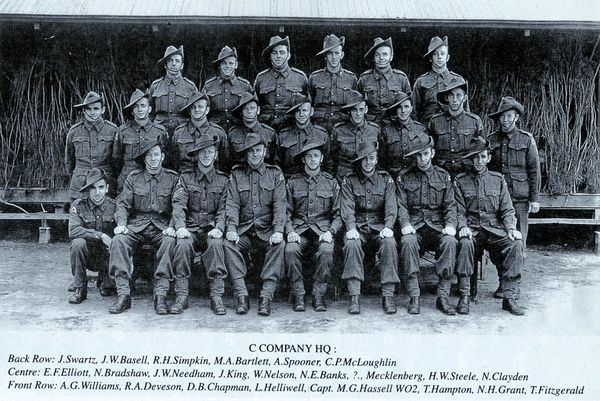 "The memory and sprit of James William Basell will proudly live on forever in the hearts of James and Ethel's 8 grandchildren."