Undertook his medical examination successfully on 21 Jun 1940, but did not enlist at the Claremont Recruit Reception depot until 25 Oct 1940. On 15 Nov 1940 he was appointed temporary Lance Corporal at Claremont before being transferred on 28 Nov 1940 to the No. 3 Depot Battalion at Northam camp, where he was quickly taken on by the 2/4th Australian Machine Gun Battalion on 5 Dec 1940 and allocated to 'A' Company.

On 24 Jan 1941 Harold was promoted to Acting Corporal. Along with the rest of the battalion he enjoyed leave from 1 - 8 Jul 1941 before boarding the HMT Duntroon for Adelaide on 21 Jul 1941, disembarking in Adelaide four days later. After training in the Adelaide foothills the battalion left for Darwin on 11 Oct 1941, arriving there on 19 Oct 1941, and on 6 Nov 1941 he was appointed Acting Lance Sergeant.

On 30 Dec 1941 along with the rest of the battalion, he boarded the HMT Aquitania, ostensibly for Port Moresby where they expected to join an escorted convoy for Singapore. With Japanese activity now just to the north of Papua / New Guinea, they instead took the long way round, via Sydney and Fremantle. On arrival in Singapore the unit was split up and sent to various parts of the island to prepare for the Japanese attack. On 29 Jan 1942 Edward was confirmed as a Corporal, although still acting as a Lance Sergeant. By 15 February the surrender of Singapore had occurred and Edward like most of his unit was a Prisoner of War. While authorities assumed that he was a POW, this status was confirmed on 30 Aug 1943. He had two POW Numbers during his incarceration, 4/4752 in Singapore, and 8723 as part of D Force Thailand's S Battalion. During his time as a POW Tony was at times located in the following camps: Adam Park Camp - Singapore; Johore Bahru, - Malaya; Selarang Barracks Changi - Singapore; Selarang Camp Changi - Singapore; Sime Road Camp - Singapore; Hintok, 154k - Thailand; Kanu II, 152.30k - Thailand; Nakom Nayok, Nakhon Nayok - Thailand; Nikhe Wood Camp, Ni Thea, 131 Kilo, 284k - Thailand; and Tamuang, Tha Muang 39k - Thailand.

Recovered from his capturers on 29 Aug 1945, Harold was repatriated from Thailand to Singapore by aircraft. A month later on 24 Sep 1945 he was flown from Singapore to Brisbane via Labuan, and Morotai, arriving on 26 Sep 1945. On 30 Sep 1945 he caught the overnight train from Brisbane to Sydney, and on 2 Oct 1945 he boarded a troop train in Sydney for Perth via Melbourne, arriving on 6 Oct 1945.

On arrival he was sent to the 110th Australian Base Hospital Perth (Hollywood Repatriation Hospital in later years). Given some leave, he entered the hospital again on 8 Nov 1945, and a week later he was released to the 109th Australian Convalescent Depot at Point Walter. On 5 Dec 1945 he was well enough to be discharged. 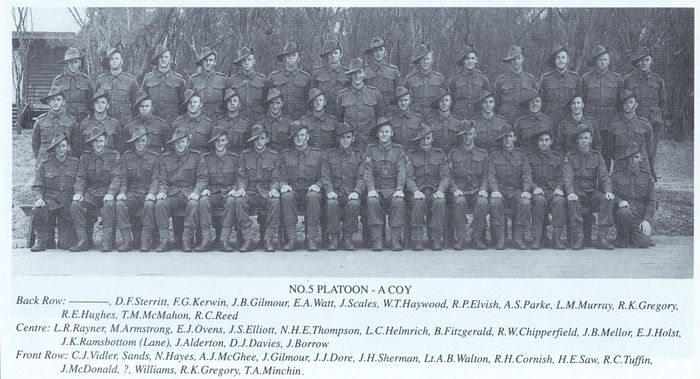 Harold's entry on the The Australian Ex-Prisoners of War Memorial wall in Ballaratt, Victoria