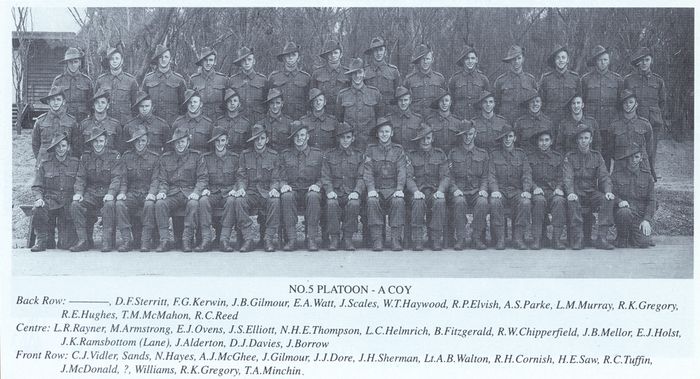 Basil along with the rest of the 2/4th Machine Gun Battalion, embarked in Darwin on 30 Dec 1971, and while his records say it was for 8th Military District, which covered New Guinea, the Solomon Islands, and the New Hebrides, the real destination was Singapore. They had gone to Port Moresby to join an escorted convoy. Given that the Japanese had recently attacked Rabaul, despite the urgency, the convoy was rerouted to Singapore via Sydney and Fremantle. On 27 Jan 1942 the battalion and Basil disembarked in Singapore. On 8 Feb 1942 the Japanese attack on Singapore Island commenced and it was all over by 15 Jan 1942.

His records were noted on 16 Feb 1942 as Missing in Malaya, and later Missing believed POW. Basil was held for some time in Singapore, with POW Number 2/122245 in the Selarang Camp, Changi, the Adam Park camp on Johore Bahru (now known as Santosa Island), and the Selarang Barracks at Changi. Basil was sent as a member of 'D' Force, S Battalion with POW Number 8776 to Siam (Thailand). While a POW in Singapore he had been hospitalised several times with illness, on 12 Nov 1942 with painful feet, and on 30 Nov 1942 with dysentery.

S Battalion departed Singapore Railway Station on 14 May 1943 headed for Bampong, Thailand. They were crowded into small rail wagons and took turns to sit or lie down. It was stinking hot during the 5 days, and freezing cold at nights. They stayed a day or so at Komna Transit Camp bear Bampong before being trucked to Kanchanaburi where after a short stay they were marched out to Tarsau, which was HQ for S Battalion. At Tarsau the worked on clearing the way for the laying of the railway. These few weeks were not particularly difficult as the terrain was flat.

They were next moved to Kanyu II which was one of many camps to work on the Hellfire Pass cuttings. It was here that the POWs lived day to day in hell. Monsoon rains arrived, and with little or no clothing and mostly no shoes they worked at chipping away at the great rock face, injuring their limbs and bodies with flying pieces of rock – fearing their wounds would advance into ulcers. They suffered severe tropical illnesses for which they had no medicines – malaria, dysentery, tropical ulcers and finally cholera – the deadliest of all. They worked long hours, were provided minimal food, of no nutritional value, and beaten by their guards without provocation.

From Kanyu II men were sent to one of the Hintok camps or other nearby camps such as Konkoita, and possibly from Sonkurai to the Nikhe-Nikhe Defence Line from May 1945. It appears Basil was ill and was included in an evacuation of the sick to Chungkai. He was in turn sent to Kanchanaburi.

Basil was granted Proficiency Pay from 15 Aug 1945 so that may be the day he was freed, but on 20 Aug 1945 Basil was recovered from Thailand and returned to Singapore by plane on 6 Oct 1945 where he was admitted to the 2/14th Australian General Hospital. On 29 Oct 1945 he was well enough to embark on HMHS Karoa for Fremantle where he disembarked on 7 Nov 1945 and entered the 110th Australian Base Hospital Perth (Hollywood Repatriation Hospital) until 27 Nov 1945. Not yet fit enough to be discharged he spent time at the 109th Australian Convalescent Depot at Point Walter, with several brief periods in hospital until he was discharged on 11 May 1946.