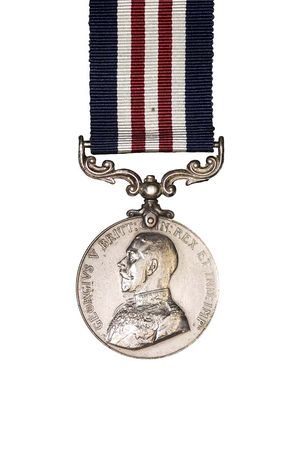 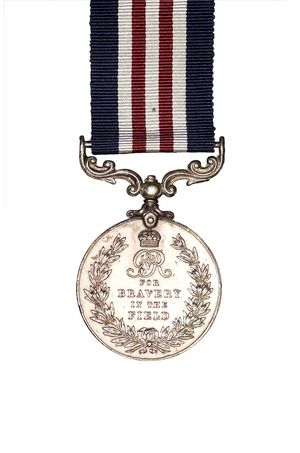 Until 1993 the Military Medal was awarded to personnel below commissioned rank for bravery in battle on land for British & Commonwealth forces.

Established on 25 March 1916 (and back dated to 1914) it was the enlisted men and women's equivalent to the Commissioned rank's Military Cross.

When the medal was first introduced, it was unpopular among regular soldiers. Frank Richards writes:

"There were no grants or allowances with the Military Medal, which without a shadow of a doubt had been introduced to save awarding too many DCMs. With the DCM went a money-grant of twenty pounds, and a man in receipt of a life pension who had won the DCM was entitled to an extra sixpence a day on to his pension. After the new decoration was introduced, for every DCM awarded there were fifty Military Medals. The old regular soldiers thought very little of the new decoration[1]

Recipients are entitled to use the post-nominal letters of MM or MM & Bar, and across the Commonwealth Nations, 115,000 Military medals were awarded during WW1. Those who won it a second time were said to have a Bar to their MM, and 5,700 men won an MM & Bar. 180 men were deemed worthy three times, thus earning an MM & Bar & Bar, while Private Ernest Albert Corey, a stretcher bearer in the Australian 55th Battalion was awarded the MM on four separate occasions.

Since 1993 Australia has developed its own honours system with the modern day equivalent award being the Medal for Gallantry.

It is a circular silver medal of 36mm diameter, with the obverse bearing the effigy of the reigning monarch. The reverse has the inscription "FOR BRAVERY ON THE FIELD" in four lines, surrounded by a laurel wreath, surmounted by the Royal Cypher and Imperial Crown. The suspender is of an ornate scroll type, with the ribbon dark blue with five equal stripes - white, red, white, red and white.

Those who came to the district after WW1

Ironically, while Nurses and Sisters in the Medical Corp were accorded Commissioned rank privileges, those who were granted Bravery awards received the Military Medal and not the Military Cross as did officers.