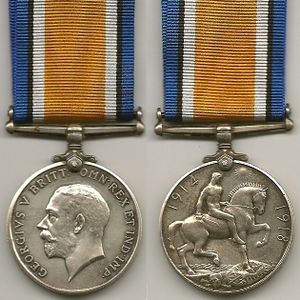 The British War Medal was instituted in 1919 to recognise the successful conclusion of the First World War (1914-1918). Its coverage was later extended to recognise service until 1920, recognising mine clearing operations at sea, and participation in operations in North and South Russia, the eastern Baltic, Siberia, the Black Sea and the Caspian.

Essentially the requirement was that the individual had to have left his/her native shores for service overseas.

The medal is silver and circular.

The obverse of this medal shows the uncrowned left-facing profile of King George V by Sir Bertram Mackennal. The reverse of the medal depicts St George on horseback trampling underfoot the eagle shield of the Central Powers, and a skull and cross-bones (the emblems of death). Above, the sun has risen in victory. The figure is mounted on horseback to symbolise man's mind controlling a force of greater strength than his own, and thus alludes to the scientific and mechanical developments and machines which helped to win the war..[1]

The ribbon has a central stripe of golden yellow, with three thin stripes of white, black and blue on both sides.

The soldiers regiment and number are inscribed around the rim of the medal.

All those in categories other than "Australia", as they did not leave our shores. 6,610.000 British War medals were issued.