Ambulance trains were used at various stages of medical evacuation from the front line to hospitals. They transported men away from battle as early as from advanced dressing stations. Light railways were used to transport soldiers to casualty clearing stations (CCS), which were deliberately built on railway lines for the movement of soldiers and medical supplies. Ambulance trains were then used again to move men from the CCS to base hospitals, and from the base hospitals to evacuation ports.

The average load carried on a train was 400 to 500 patients, more than half of whom were quite helpless and a large number in a critical condition. Nurses from the trains, while waiting to load, would help at this C.C.S. The cases were exceedingly bad ones, brought there practically as they had been found on the field of battle. All that could be done for them at the C.C.S. was to dress their wounds and give them food. The patients taken on to the train were wearing full uniform in a shocking condition of filth. Owing to the cramped and difficult accommodation, it was almost impossible to undress the patients in the ordinary way, and consequently there was a great sacrifice of clothing. Where under normal conditions the clothes could have been removed and saved, for the sake of the patient they had to be cut away, and were of no further use.

The disposition of coaches on all the first Ambulance Trains was the same. One half of the train was set apart for what was known as ‘Lying cases’, and each compartment of the coach had 4 couchettes. In the middle of the train was the Dispensary, the coach for the Staff and the kitchens. The remaining portion of the train was ordinary 2nd or 3rd Class accommodation, where the so-called ‘walking cases’ were taken in.

The Sisters’ quarters on the first 10 Ambulance Trains were in the Staff coach differing a little in position on each train. The arrangements on one of the trains, and one which on the whole was the best as regards the Sisters, was as follows:- At each end of the Staff coach was a separate compartment of 4 couchettes, divided off from the central compartments. These latter compartments were occupied by the 3 Medical Officers, and each of the end ones by two Sisters, so that they had the advantage of being quite private in their quarters. The one drawback was the lavatory accommodation which was in the middle of the coach.

The Restaurant car attached to the Staff coach was so divided that a part was used for the Mess Room, and the other part for the Dispensary. No.7 Ambulance Train was a little different from the others in that part was reserved for French troops. 4 coaches were given up to them, and there was a French Major and 6 orderlies, who were assisted by the British Sisters when necessary.

The Medical Staff consisted of 3 officers – the C.O., usually a Major, and two Lieutenants. The Nursing Staff of 4 on the train was usually distributed as follows. the Sister-in-Charge took the supervision of the whole train, was responsible for the Officers’ coach, and as much as possible helped where it was most needed. Two of the other Sisters were responsible for the ‘lying cases’ of other ranks, and the fourth was responsible for all the ‘sitting cases’. Two of the staff always remained on duty throughout the night, and frequently the whole four did so. 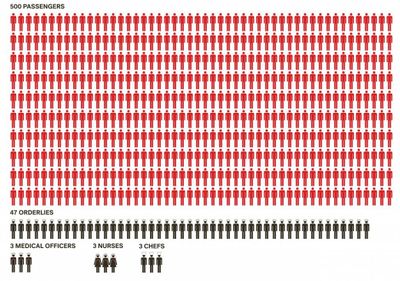 Generally the Ambulance trains carried casualties to hospitals near the French coast where they received further treatment before many that required extensive recovery were sent on to England. Once the men had arrived in Britain by ship, they were loaded onto the home ambulance trains that took them to hospital. Their operation was the responsibility of the RAMC, and an RAMC Major was in charge of each train. 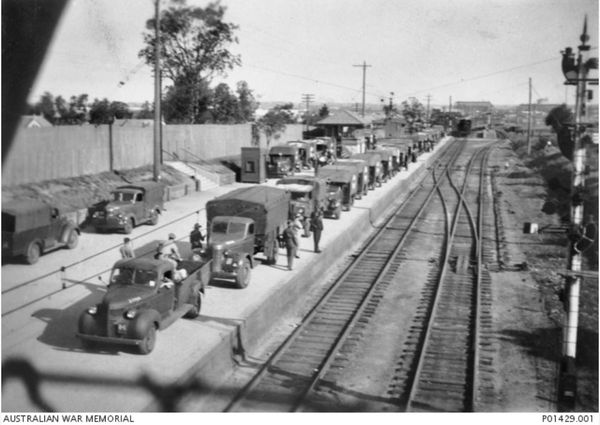 Ambulances at an English station awaiting the arrival of an English Ambulance Train from Dover or Southampton AWM photo P01429.001

Between journeys staff sometimes waited for days or even weeks for their next load of patients. A standard ambulance train consisted of sixteen cars, which included a pharmacy car, two kitchens, a personnel car, and a brake and stores car. The eleven patient cars would usually carry about 40 patients each, 36 bed patients and four seated. Most trains feeding ships for England did so in Boulogne, with the men being landed at Dover and Southampton. By war's end 2.7 million men had used the Ambulance Trains.