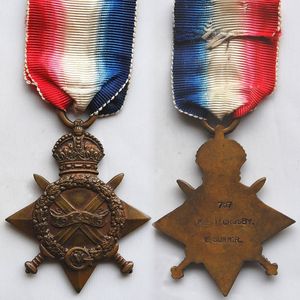 Those eligible for the medal must have "served on the establishment of a unit in a theatre of war" during the relevant dates of operations in that area.[1]

The reverse of the 1914-15 Star is plain, except for the inscribed name and service details of the recipient. The medal is bronze and is attached to the ribbon by a ring.

Initially this medal was not intended for those who fought at Gallipoli. Instead it had been proposed that a 'Gallipoli Star', or 'ANZAC Star' would be given to Australian and New Zealand troops. However, there was unease in Britain that men from other Commonwealth nations would not be eligible and so, despite it having been approved by King George V, it was substituted with the 1914-15 Star.[2]

In 1967 Gallipoli specific service was rewarded in Australia and New Zealand with the issue of a Gallipoli Medal (not intended to be worn) to those who were eligible, or their next of kin.